You are here: Home / Spy Gear / Where To Hide A Voice Activated Recorder In A Car Do you know what the biggest weakness of any hidden recording device is?

If we do a poor job of hiding it, it is useless.

If it is easy to spot, chances are it won’t stay hidden and the person you are trying to record will find out you are recording them.

If you hide it in a particularly noisy spot, you might end up with an unclear recording where you can’t make out what is being said.

You need to know where to hide a voice activated recorder in a car, in order for it to function correctly and give you clear, usable recordings.

Keep reading to learn the best hiding spots and everything else you need to know about recording someone in a car.

Where To Hide A Voice Activated Recorder In A Car

Obviously, the first thing to consider when hiding a voice recorder in a car is to put it somewhere it won’t easily be seen.

The best places for this include the glove compartment, the pouch of the front seat, or underneath one of the car seats.

You might worry that placing it underneath a seat will prevent the sound from being recorded effectively, but this should not be an issue for any quality voice recorder.

Good ones are designed so that they can be hidden out of sight without this affecting their recording quality. Some audio recorders can even be hidden in plain sight, like those that are designed to look like a car remote or other common item.

This means you can place them anywhere in the car and you won’t have to worry about them looking suspicious. You could even hang them on a keychain with your car key.

A keychain voice recorder has another big advantage: you can take it with you wherever you go and record audio.

But that brings with it the obvious disadvantage: you can only record when you are around. Of course, you could leave it behind in a car, but if anyone sees it, they will most likely grab it and return it to you. And it would be difficult to use it in someone else’s car.

How Long Does Your Voice Activated Recorder Last?

An important thing to consider when you want to use a voice recorder is how long its battery will last.

You can find recording devices that will work for 180 hours on a full charge, like perhaps the best voice recorder available, the db9 Pro.

Features To Look For In A Good Voice Recorder For Cars

To ensure that you get the voice recording quality, here are the most important features to look for in an audio recording device. Since you might not be there to activate the device, you want one that can switch itself on. Generally, these devices turn on when they pick up on a sound that’s loud enough for them to detect.

Then the device will automatically start recording.

To save battery life, you should look for audio recorders that can go into sleep mode when they’re not recording. This also prevents you from having to sift through lots of quiet periods on the recorded files when reviewing them.

A good tip when purchasing an audio recording device is to look for the words “standby battery” and “continuous time”. Both are used to indicate a standby feature.

You can find some examples of products with voice activation and standby mode on our list of the best listening devices. All have these features.

You will need to think about how much storage space the device should have. The last thing you want to have happen is that the device runs out of storage space and you don’t get the audio recordings that you wanted.

How much storage is enough?

Here’s a rough guideline to give you some perspective on storage space: a device that has 32 GB of internal memory could store up to 2000 hours of audio recordings. You can easily get away with a lot less, say around 4GB, to record a few hundred hours of audio.

How many hours exactly can vary greatly, since it depends on audio quality and other factors.

If you’re not sure if you’ll need greater storage capacity in future, consider purchasing a voice activated recorder that has a microSD slot. This means you’ll be able to expand the device’s memory if required.

This is another good feature to have in an audio recording device. Basically, it helps you to track your audio recordings according to the date and time. This is especially useful if you’re going to be recording a lot of audio on different days and you plan to organize it somehow. You can find a range of different audio recording devices, like ones that look like small boxes or power banks, and others that are heavily disguised so that they look like pens, keychains, USB sticks or VIP cards.

Recorders that look like common objects make it much easier to hide them and record someone without them finding out about it. Naturally, if you want people to know they are being recorded, or if it does not matter, just get a recording device that looks like one.

You don’t want to have to battle to get the audio recordings to play on your computer, smartphone, or other devices.

To prevent that from happening, make sure you choose a recording device that can record and save audio in various file formats.

It is also good if it can record at various sample or bit rates, so that you can choose between higher quality or longer recording time (since lower quality files take up less storage space), as needed.

This is something you don’t have to worry about too much if you’re just going to be recording people’s conversations in the car. The recording device will always be in close proximity to the audio source.

But if you plan to also record in other settings where the device might be further away from the source, you want to make sure it has sufficient range.

In a car there can be a lot of external noise that can make audio recordings less clear. A noise-cancelling feature will remove the majority of background noise so that you primarily hear the recorded voices. 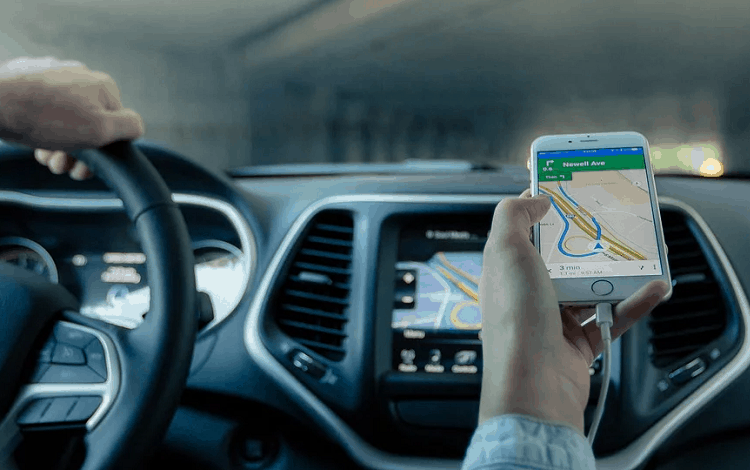 An alternative to a voice activated recorder is a GPS tracker that also records voices.

This can come in handy if you want to track someone’s location and record their conversations. There are many GPS trackers on the market that have the added benefit of audio recording functions.

You just have to call a number from your device and you’ll be able to hear a one-way audio channel. It comes with a monthly service that gives you GPS location tracking every 30 seconds as well as up to two hours of real-time live audio.

If you find you need more audio time, because you’re tracking someone over a long period of time, for example, you can increase the amount of real-time audio by paying an additional fee per hour of use.

Another option is to use a hidden camera in your car. Most cameras also record audio. Hiding a camera brings different concerns. Read How To Hide A Camera In Your Car for more.

How Does A Voice Activated Recording Device Work?

As its name suggests, a voice activated recording device is activated by voices. This seems obvious, but we did get this question a lot, so we decided to just answer it here.

These devices are dormant until a loud voice activates them and they start recording. You can find voice activated recording devices that have a range of useful features, which we’ll get to later in the article.

Where can you place a GPS tracker in your car?

As with voice activated recording devices, GPS trackers with audio features can easily be hidden in various spots in your car so that they’re not easily detectable.

This includes putting them underneath a car seat, in the glove compartment, or beneath the car’s rear bumper. Obviously, the last location would not be able to record audio inside the vehicle.

How far away from the source can an activated voice recorder work?

Some voice recorders on the market can record voices and other sounds up to 60 feet away from the target.

Hiding A Voice Recorder In A Car: Conclusion

If you want to hide an audio recording device in your car, you need to ensure you put it somewhere where it won’t easily be found, even by someone who knows how to find out if their car is bugged.

Or you get a recorder that looks like an everyday object, so that you can hide it in plain sight.

We talked about that, and other important features to look for in an audio recording device, above. If you still have any questions about voice recorders and how best to hide them in a car, please leave a comment below.