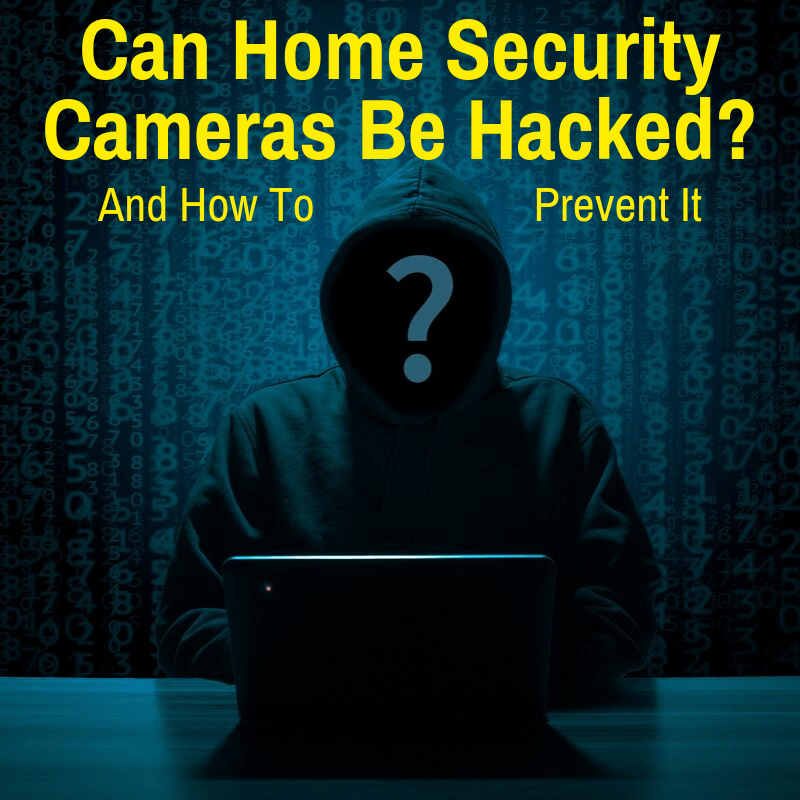 WiFi security cameras have a lot of advantages.

But they also have one huge disadvantage.

They are much easier to set up. You don’t need to run a bunch of cable through your walls to connect all your cameras to your system. They simply connect via WiFi.

WiFi also allows you to monitor your cameras remotely from your smartphone. If any of them detect motion, you can get an alert and see instantly what is going on.

On the flip side, these smart or Wi-Fi enabled home security systems are much easier to hack.

With a wired system, an intruder would have to physically wire into your system. With WiFi, they can do so remotely.

It should come as no surprise then that 61% of homeowners are worried that their home security systems might be hacked.

Is that fear justified? And can anything be done to prevent a hack?

Let’s take a closer look. We’ll answer those questions and more, plus give you plenty of tips to help thwart any would-be hackers from gaining access to your cameras.

Although the odds of modern security systems being hacked are slim, the fear isn’t unwarranted. Just look atn recent attacks on Vtech, Jeep and Mattel products, where skilled hackers were able to break into internet-connected devices within minutes.

The good news is that there are a number of things you can do to protect your home security system from being hacked.

Given the risk of hacking, however small, you might think that buying home security cameras or smart systems is too risky. But that’s only if you leave yourself vulnerable.

Fortunately, there are a number of steps you can take to considerably lower your chances of being hacked.

With these tips, you can buy and use a WiFi enabled security systems with greater confidence. So let’s take a look at how home security systems can be hacked and what you can do to prevent it.

How Home Security Cameras Can Get Hacked

There are a number of different ways your home security system can get hacked. We’ll outline a few of them here.

One of the ways hackers can take control of your home security system’s connectivity is by using a botnet. A botnet is a network of hidden or private computers that is comprised of malicious software and controlled as a group without the owner being aware of it.

When it comes to security cameras, the hackers try to gain access to their connectivity. This kind of hack can also target other seemingly harmless devices such as DVRs and printers.

The aim of this hack isn’t necessarily to use your camera’s video feed against you, but rather to hijack the camera’s online connectivity and processing for other means, which may include a Distributed Denial of Service (DDoS) attack.

A DDoS attack is an underhanded tactic to make online services unavailable by stuffing it with excess traffic from plenty of sources.

These attacks set their sights on numerous important resources, such as news and bank websites, as well as making it harder for people to publish and access crucial information online.

An example of such an attack was witnessed in October 2016, when a New-Hampshire-based company that monitors and routes online traffic known as Dyn fell to a massive DDoS attack that prevented some East Coast users from accessing Spotify, Twitter, Amazon, Netflix, Reddit, Tumblr, PayPal as well as other heavily trafficked sites.

This is a more dangerous hack, in which hackers gain access to your home security camera’s video feed. It can happen as a local or remote attack.

Once they have the password, they will be able to access your network as well as your home security camera’s connectivity.

The other local hack involves “spoofing” your router, which would lock you out of your actual device.

You may have noticed that once you’ve connected to a wireless network for the first time, the router never asks you to access your network again. Instead, you will simply access the network as soon as your router is within range.

Although it is convenient, it also acts as a vulnerability to hackers who try to “spoof” your network.

This is done by creating a “spoof” network, which may look like your own connection but actually isn’t. The spoof network has a stronger wireless connection with a copied service set identifier (SSID) and is set in the same area as your authentic network.

As a result, unsuspecting computers as well as other devices automatically connect to the “spoof” instead of the real one.

In these attacks, hackers try to find a vulnerable point in your computer’s or network’s security software, so they can subsequently bypass it to access the system.

When a home security camera’s video feed is transmitted online, it could be vulnerable to password attacks.

Data breaches could make your security cameras and other connected devices susceptible to remote attacks. Unfortunately, once hacked, there isn’t anything you can do to prevent the attacks, but frequently changing passwords can be helpful.

How To Hack Home Security Cameras

Learn how people do it in order to protect your system.

How To Know If Your Security Camera Has Been Hacked

In all honesty, it is very hard to know if or when your home security camera has been hacked. That said, one sure sign is when your security cameras exhibit slower or downgraded performance.

When your connected home security camera has been hacked, the device’s CPU cycles work very hard, which ultimately interferes with the camera’s regular functionality.

Of course, reduced performances could also be the result of a poor connection or signal. It does not necessarily indicate an attack.

But if you notice your cameras performing below their usual level, it wouldn’t hurt to take a few precautionary measures. Let’s take a look at some of them.

How To Prevent Security Camera Attacks By Hackers

There are a few different things you can to prevent your home security system from being hacked.

Using easy-to-remember or obvious passwords that are just general terms and phrases is not going to fly, given how savvy the hackers of today have become.

Therefore, when setting up your camera, be sure to use stronger passwords, especially ones that contain both lower and upper case letters, symbols and numbers. The more complex, the better.

Updating your security camera’s firmware is necessary to not only fix bugs and enhance the product’s performance, but also to solve and prevent security flaws and loopholes.

Online security cameras these days support remote viewing, which is a function that allows you to monitor your house using an app or a website while you’re away.

Even though this is convenient and appealing, using an app or a website can expose you to hackers if your password isn’t strong enough. If you’re worried about this, then it would be best for you to turn off the online monitoring function.

This is an obvious strategy to protect your network as well as your computer system. Effective strategies include:

Video: How To Protects Security Cameras From Hackers

Preventing your Home Security System from Getting Hacked: Your Thoughts

Any tips or tricks to share with us about keeping your home security system safe from attack? Leave a comment below and let us know your thoughts.