You are here: Home / Drones / Jamming A Drone Signal: Is It Legal And How To Do It 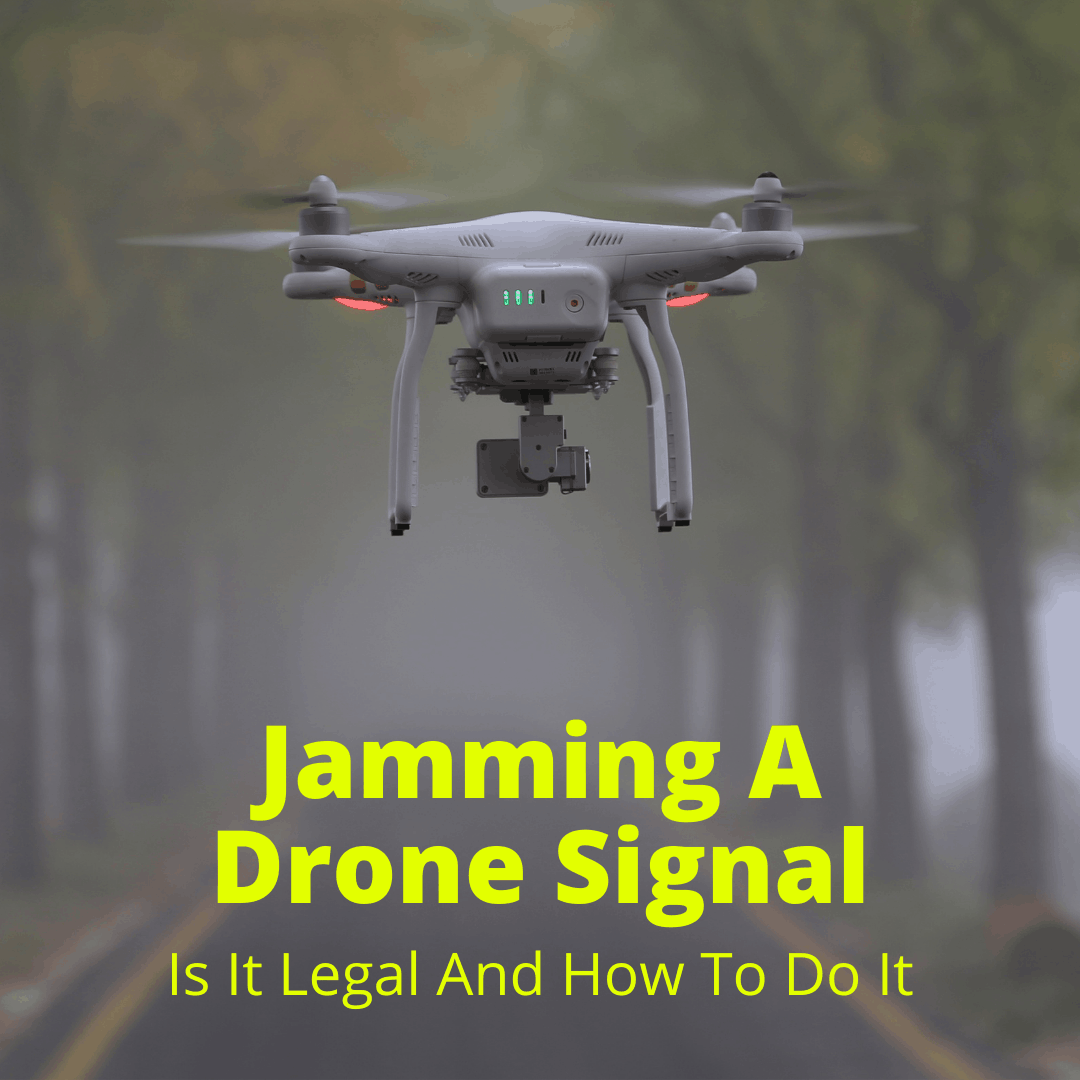 But in the hands of annoying people, those inventions only magnify the annoyingness.

This is true for cars, cell phones and any other great invention.

It is also true for drones.

Since you’re here, I’m guessing someone is bothering you with their drone.

Then you’ve probably searched for ways to stop them and you came across the idea of jamming the drone signal. Keep reading. It’s important.

We’ll cover everything you need to know about drone jamming, including the legal issues. And trust us, you need to read about those BEFORE you take any action.

Jamming Drone Frequencies: How It Works

In order to jam drone frequencies, you need a drone jammer. This is a piece of equipment that contains a transmitter that can be of various sizes and shapes.

This transmitter sends electromagnetic noise to override the same signals that a drone requires to operate.

When it’s aimed at a drone, the jammer disrupts the GPS and radio signals that are helping that drone to reach its location. In some cases, jammers can achieve this from several kilometers away. A drone jammer blocks or jams the frequency that a drone uses to communicate with its ground station. This frequency is either 2.4GHz or 5.8GHz.

When you jam a drone, you can force it to land immediately or go back to its original location. This is because the drone is designed to go back to its home if there’s a connection mishap.

Drone Jamming: Why Do It?

There are many instances in which drones can be seen as unethical and malicious because of how they’re being used for voyeurism.

There are also dangers associated with them when it comes to how they can disrupt emergency response operations, delay commercial flights, and more. This can make you want to get involved in jamming a drone signal, such as with the use of a drone jammer.

Is It Legal To Jam A Drone?

If you’ve read this article up to here, chances are you’re interested in jamming a drone signal.

But wait! Before you proceed it’s important to know if this activity is legal.

The short answer? It’s not.

It’s illegal to use a jamming device and, as the Federal Communications Commission states, devices that are used to block or interfere with radio communications violate federal law.

It’s also illegal to distribute, sell, or advertise these products in the U.S. If you go ahead with your drone-jamming mission, bear in mind that if you get caught you could end up paying hefty penalties. You might even end up in prison.

There are good reasons for these laws. 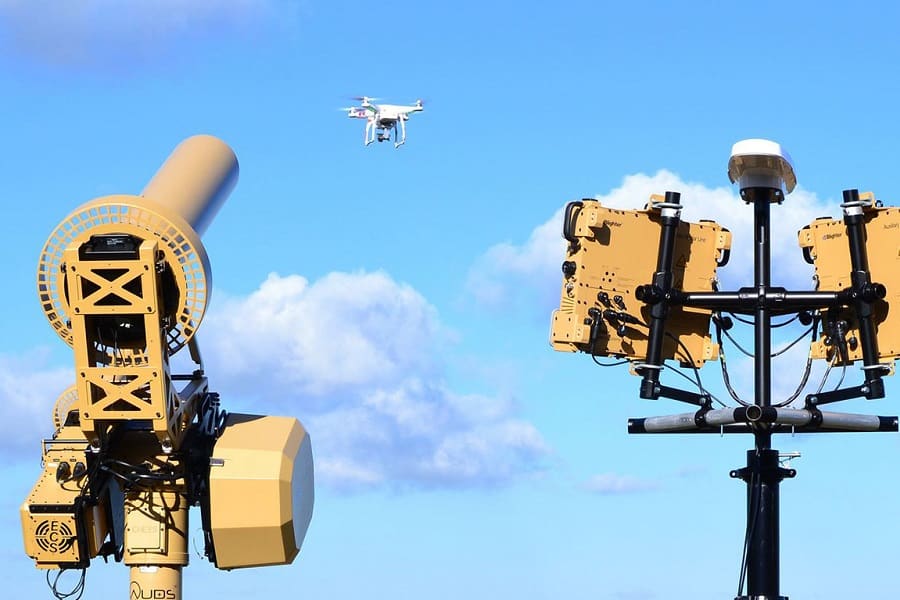 For starters, when you jam a drone signal, you risk interfering with important safety communications for the public. You can also harm people or property if the drone falls out of the sky.

In 2018, there was a drone jamming incident in Hong Kong that caused chaos. During a light show, over 40 drones fell from the sky because their GPS signals were disrupted by jamming equipment. The incident caused approximately 1 million Hong Kong dollars (around $130,000 USD) in damages!

Other Risks Of Drone Jamming

The problem with drone jamming is that there’s a lot of information about the drone that is unknown by the jammer.

For example, where was the drone intended to go? Has it been set to reach a target even if it’s interrupted? What if it’s carrying a sensitive item that could prove dangerous to people if the drone crashes?

Since jammers don’t get to locate the drone’s path of flight or have access to information about the drone pilot, this can make drone jamming even more potentially dangerous.

How Drones Are Thwarting Jamming Attempts With the problem of jamming, there have been technological advancements to make drones more immune to the threat of having their frequencies disrupted.

For example, a device known as the GPSdome by a company called infiniDome actually uses an interference filtering system to ward off jamming attempts.

It combines patterns from two omnidirectional antennas so that the GPSdome can monitor and analyze interference signals in real time.

It then inputs that information into the company’s algorithm, so that it can reject interference. It can also alert the operators that there’s a jamming attempt being made on the drone.

This type of dome has already been included in some military-grade aerial systems.

If you’ve heard about drone jamming and spoofing, you might wonder if they’re the same thing. They do have some important differences that you should know about.

While drone jamming involves trying to block the drone’s signals so that the pilot loses communication with the drone, spoofing is more like a drone hijacking attempt.

It’s when a third party tries to take over the drone by using its controls from a remote location.

Spoofing works by releasing a signal that the drone misinterprets as legitimate. When someone spoofs a drone, they can direct the drone’s flightpath and download its data. Sometimes spoofers can even gain access to the drone’s camera feed!

What Should You Do If A Drone Is Spying On You? Since you might not want to go ahead and try drone jamming because of the laws prohibiting it, you might still have a real problem on your hands if you feel you’re being spied on by a drone.

But there are things you can do.

First, gain some perspective – the drone is probably not spying on you.

It could be gathering information about the neighborhood for a variety of non-malicious reasons, such as inspecting properties or taking measurements for the installation of solar panels.

It’s also worth bearing in mind that drones are not illegal and they are allowed to fly over your property. The Federal Aviation Administration controls the air that’s above your home, and the airspace above your home is considered a public transportation route, like the street or road outside your home.

That said, if you find that the drone operator is nowhere in sight and the drone is right over your property – perhaps even hovering right outside one of your windows – then your angry complaint against the drone could be valid. If this is the case, here’s what you should do.

Check the laws in your city and state

It’s important to realize that very few places actually have laws in place that pertain specifically to drones. You will have to consider how the drone is upsetting you and then try to find laws that deal with those issues.

For example, if you feel watched or stalked by a drone, you will have to check existing laws in your state that refer to stalking and harassment.

Similarly, if you’re worried that images are being taken of you without your consent and it’s a violation of your privacy, you’ll have to check your city’s and state’s laws about privacy.

Keep a record of the drone’s activity

Keep a document that includes a record of the dates and times when the drone was seen. It’s also good to try to take pictures of the drone so that you can see the make and model of it.

Bear in mind that both commercial and recreational drones need to be registered and you should see a registration number printed on the side of the drone. This evidence will help you when you contact your local police to report what has been happening to you.

Can you shoot down a drone?

Shooting a drone instead of jamming it is also illegal under federal law. This can also be dangerous. The drone could fall on someone and cause injury.

Can you shine a laser pointer at a drone?

A laser pointer could possibly blind the drone camera and cause the operator to lose control of it, but it’s not allowed.

How high is a drone allowed to fly?

Recreational drones can’t fly more than 400 feet in the air, while commercial drones can go much higher.

If you think a drone is spying on you or you’re just sick and tired of seeing drones in your area, you might think that jamming drones is a good way to deal with them and prevent them from violating your privacy.

Although there are drone jamming devices available to purchase, these are in direct violation of federal law and can get you imprisoned. It’s therefore better to find other ways of dealing with annoying drones, like those featured in this article.

Zeke Daniels
Zeke is a huge fan of quadcopters and drones and has been flying them for more than a decade now. He loves to stay up to date on the latest technology and new releases. He's passionate about sharing his knowledge with you so that you can find the best drone for your needs.